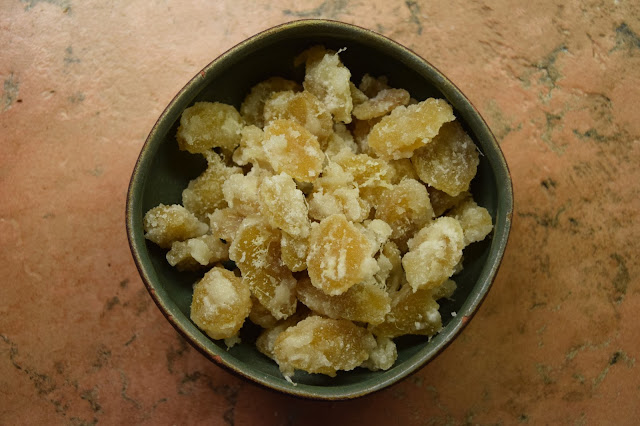 I love ginger. It all started with ginger ale, then pickled ginger with sushi. Then I discovered ginger beer (which is a lovely non-alcoholic beverage), then I turned 21 and discovered that gin goes particularly well with all non-alcoholic ginger beverages. When I am at a loss and at a bar, gin and ginger ale it is.

So when I went to Whole Foods about a month ago and impulsively picked up a package of candied ginger, it was pretty clear I would enjoy the confection.

Here's what I didn't expect: I could not stop dipping into the bag for a tiny treat...even after breakfast I sometimes grabbed a piece while loading my bowl and spoon into the dishwasher. 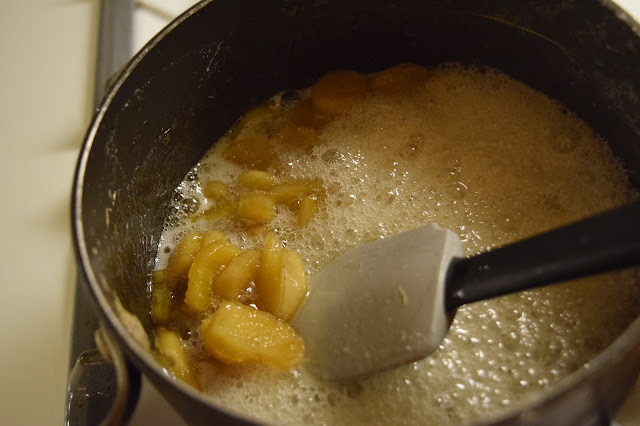 It's spicy, it's sweet, it's crunchy on the outside and perfectly chewy on the inside (apparently the most addicting texture...just think about oreos!).

Also, I would be remiss if I did not mention that ginger has a laundry list of health benefits. It's good for stomach problems/nausea, is anti-inflammatory, and has immune-boosting properties. (Obviously these things are secondary to the deliciousness of candy!). 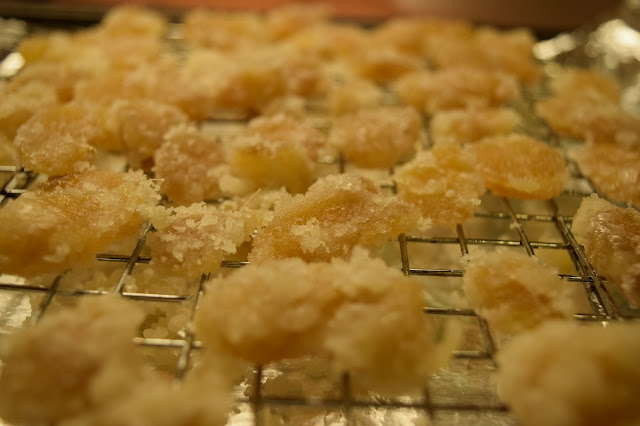 To make this treat at home, I turned to the teachings of food alchemist and chemist Alton Brown. You start by boiling the ginger alone until tender, then drain (saving the cooking liquid) and return to the pot with an equal weight of sugar and a bit of liquid. Dissolve the sugar, boil off the water, and wham bam alacazam out of a ginger flavored sky... 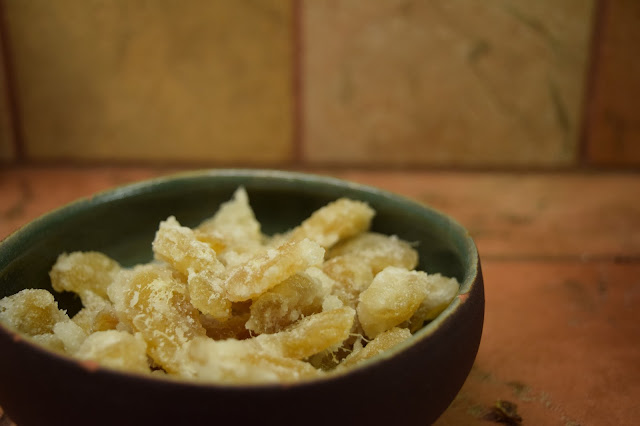 You think it's going to caramelize. It really does look like the beginning of caramel. But somehow, crystals start and once they start they spread. Soon the whole mess is white and snowy and ready to dry into crisp, sweet bites.

Candied Ginger
Yield: as much as you like! Plus some great byproducts*

*Byproducts of candying ginger:
P.S. The cooking liquid from the ginger is incredibly strong ginger "tea" concentrate...try adding some to cold water, black tea, or mixing with hot water and honey (and rum? or gin? for a hot ginger toddy!). It's super strong, so a little goes a long way!
P.P.S. The sugar that falls off the pieces is also delicious-in tea or coffee, on cookies or muffins, etc.
Posted by Catherine at 11:35 PM