I had the good fortune to be able to hang out with Stéphane, the baker at the bakery in Puynormand. It a tiny town near Bordeaux, and my friend's grandmother lives there, so I visited for a few days with her family!

We got there around 8:30 am, and he was just pulling some baguettes out of the oven. Everything happens so quickly there--blink your eyes for a second and you'll miss it. (We actually did, though. Later in the visit he showed us pictures from the workshops he's done, and before we knew it, he had taken all of the bread out of the oven).


The hot baguettes, still crackling, are taken next door to the store to be sold or put on a truck to sell in other villages. Stéphane's wife runs the store, and he has one other guy helping out in the bakery. The bread is some of the best I tasted all summer.


Then, he takes us through the process of making the dough. There are two kinds: one more rustic and the other a softer, more common flour used for basic baguettes. They produce different types of bread, too: the rustic one has bigger holes (the better to slather with butter!).

In any case, he starts with just flour and water, and works that for a while (to develop flavor). Then yeast and salt goes in, and the machine does its magic.

He uses two kinds of yeast, one that's alive and one that's completely dead. Dead, you say? Yes, dead. It doesn't make the dough rise. But after the government started regulating what could go in bread, this replaced (I think) soy lethecin. Or something else. I can't remember, but it was a chemical additive, and the dead yeast does about the same thing without adding another ingredient. It's a great loophole solution. 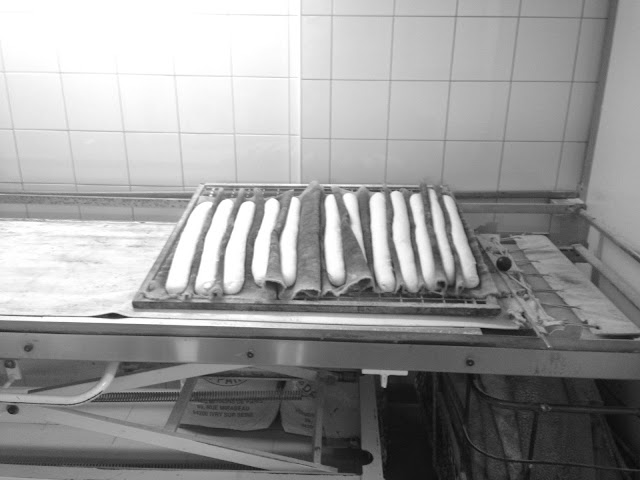 The dough is then measured by weight into the proper quantity, put in a machine to cut it into 36 exactly equal pieces, roughly shaped and sent to hang out for a while.


Stéphane then takes the little dough babies and rolls them into adult size baguettes, leaving them to rest seam side down on huge trays separated by the folds in big sheets of canvas. He showed us how to do it by hand, but usually a machine does it.


This dough rises overnight in a special fridge that gradually lowers the temperature to about 5 degrees C and then raises it to 6 or 7 degrees. It's super complex and fancy. Not a "try this at home!" kind of thing.


He makes some special loafs each day. These are batards with a nubbly surface!

He also showed us ways to create the signature pattern on top--an odd number of diagonal cuts. Never even. My friend and I tried our hands at it, and it's evident that he's really practiced at it, and we're really not. Oh well, it was fun, and practice makes perfect! 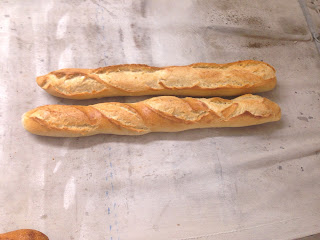 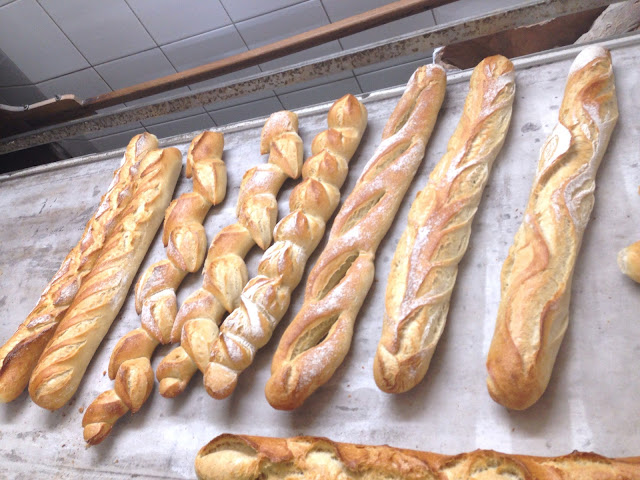 But he also showed us a pattern that is leaves, one that makes these bulbs, one with holes all down the line, one called a sausage (many shorter diagonal cuts close together), and one with a diamond pattern created by cutting two sets of diagonal lines. Some of these designs are traditional, others are his unique creations made for workshops and contests. They're beautiful. 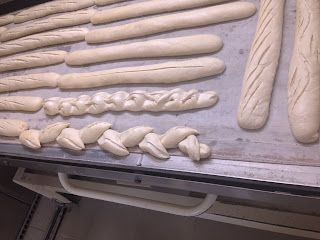 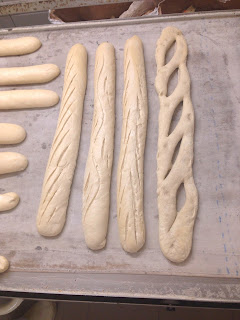 It was such a cool morning. I loved seeing the craft and artistry that goes into bread-baking, but also the science and exactitude. I gotta get my hands on some yeast and get over that fear.


This video shows one of his original designs, a braid on top of a regular loaf. It's incredible to me how fast he makes it and how beautiful it turns out! 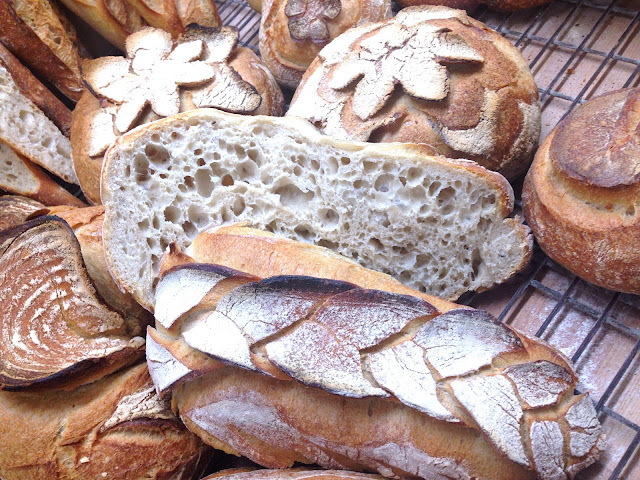 P.S. I'm home now, and my dad made rye country bread. Amazing. Different, but every bit as amazing as french bread. And accompanied with a side of waiting in a house that smells of warm yeasty sustenance.
Posted by Catherine at 2:53 PM