Breakfasts in the Dining Halls

I've been MIA. At least from this blog.

It all started when I went on a farm for a week. See, I'm just starting my freshman year at Yale, and I chose to do a pre-orientation program where you go work on an organic farm for a week before starting school (given my interest in food, it was a duh). It's a nice way to get to know a small group of people before the craziness begins.

It was amazing. Our farmer would stand around telling us our tasks for the day, munching on a carrot he literally just pulled from the ground.

And hey, if there's dirt on it, at least it's organic dirt!

The produce was amazing, so fresh and flavorful. Tomatoes were especially good, since August is prime time for tomatoes, but we did get tired of them after a while. Squeezing half rotten ones for sauce didn't exactly help...

It was super interesting to learn about the policy side of organic, too. We would ask questions as we worked, and it turns out that a lot of farmers get a certain types of cancer because they're exposed to the chemicals (fungicides, insecticides, and herbicides) they spray on their plants first hand. Our farm was a family farm, so it was really nice that they don't spray, especially since their daughters run around and help out all the time.

Anyway, now I'm settling into college life, eating in the dining halls. Since there's so much food around, there hasn't really been a need to bake (other than that innate insane desire to go make something in the kitchen).
But food prepped by someone else doesn't have to be the end of creativity! This is what I ate this morning for breakfast:

The oatmeal is great! Get creative with the toppings...today I found out the ice cream toppings were still available--boo ya--and proceeded to put heath bar bits on my oatmeal, along with some peanut butter. Good choice.

You like the strawberry sauce for the pancakes? It would probably be delicious on oatmeal or toast or cheerios too! Or a bagel with cream cheese.

And this was my second breakfast/brunch/breakfast-for-lunch: 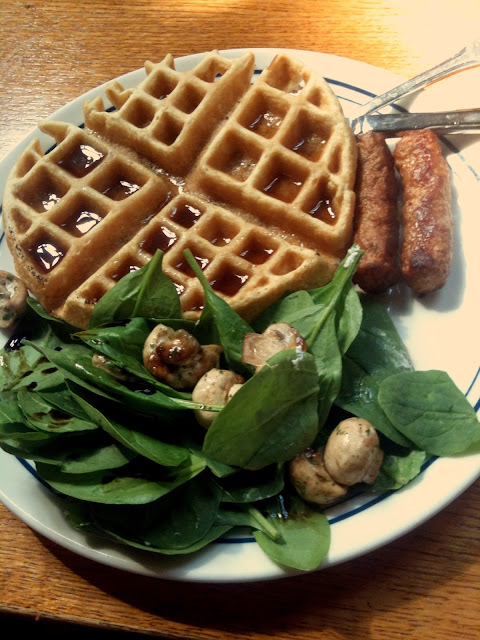 You can make your own waffles, which is super easy since the waffle maker is all ready and so is the batter. They're pretty good, sort of on par with hotel buffet waffles. They make excellent lunch :)

I also got some spinach salad with marinated mushrooms and balsamic vinegar, a mealy peach which I promptly exchanged for a kiwi after taking one bite, and some pretty good sausage. It was on the fatty side, but the outside was nice and crispy.

Kind of a long post, but there was a lot to say! More to come, probably more dining hall creativity reports and maybe some cookies (I have access to a kitchen!).